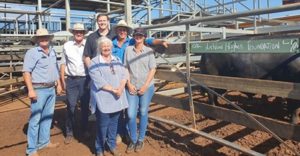 Tuesday 26th November 2019 saw the auction of two head of prime cattle at the Roma cattle sale with all proceeds going to the Lachlan Hughes Foundation.

Selling agent Geoff Maslen from Grant Daniel & Long Roma, called for bids for the first pen of the sale at 8.00am. Peter and Isabella Elmes from Augathella extremely generously donated a lovely big steer to be auctioned and Banchory Grazing (Hughes family) added a bull with Millah Murrah Angus blood lines. He was one of the heaviest animals to be sold at a weekly sale for many years.

The Roma Saleyards are the largest cattle selling facility in the southern hemisphere, seeing over 400,000 cattle sold a year.